What you should know in advance:

The first thing to keep in mind is that a club is not the same as a team. The field “club” is merely informative and, therefore, Copernicus does not generate club classifications. This means that if you have to publish rankings involving more than one participant, you will use the “team” field.

How teams work in Copérnico

Copérnico does allow the same participant to belong to several team types. In a classification, a prize can be awarded to the club with the highest participation and also to the fastest male and female teams by classifying the first 3 finishers. Male participants who have a club will appear in two team types: their club team and the men’s team.

The team configuration in Copérnico must be done for each event that contains the race. The necessary team types must be added.

The “team type” field is composed of the following information:

When the team types are already set up, the “Teams” section will appear in the left side menu. 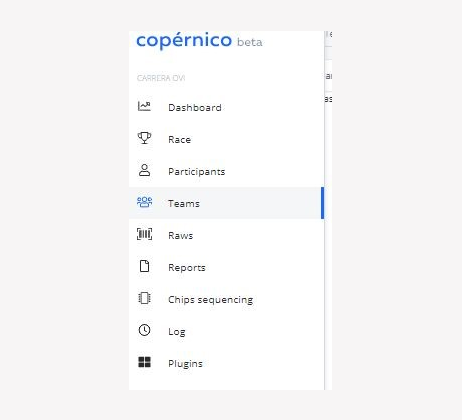 Once the participants’ data have been imported to Copernicus, from this section you will be able to consult the teams and prepare the presets for the publishing results.

We are going to explain how to import team data through the example we raised at the beginning: how to give a prize to the club with the most participation and also to the fastest male and female teams by classifying the first 3 finishers.

In this example the participants who have a club will have two types of teams: type of team “club_name” with the calculation from counter type and type of team “Male” or “Female” with using “sum of times” counting type.

You already know that the participant data can be obtained from different sources: the registration platform, the race app, a spreadsheet… You probably already have the participant data imported into Copernicus and now you need to import the team data. For the import you will need a file for two calculations per participant: counter and sum of times, which have the main data, name, surname, date of birth, gender and club, in a spreadsheet that the organizer has given you.

To make the club a type of team, in the import file you duplicate the column “Club” and in the header name it “Teams”. Next to it you create a new column called “Team type” and add the value “Counter” to the whole column.

In addition, you have to extract a classification of male and female teams: duplicate the column “Gender” and change the header to “Team type” as you did before.

The data in the import file will look like the following image:

Remember that it is imperative that each participant belonging to a team has correctly entered their team name and team types.

This is the easiest part of team timing because if you already know how to time individual athletes, you know how to time teams: start the race and wait for the athletes to arrive at the finish line so that little by little team results are produced.

Keep in mind that in team timing the classifications can evolve and change. Therefore, we recommend that, in the case of teams with “counter” type of calculation, you do not publish rankings until the end of the race.

For publishing results, you should apply what you have already learned in previous lessons and what you will learn in this course about trophies, presets and documents.

Creating the trophies of a race

Getting a ranking by attribute

Getting a classification by category

Getting an absolute classification