In Spain there is a tradition of celebrating a race on the New Year’s Eve. The whole of Spain is full of races that take place on the 30th and 31st of December.
They are usually of a jovial character and the participants run in costume, with the children, with pets… Of all of them, the most important, oldest and famous is the San Silvestre Vallecana (Madrid) which has a 10K path that starts in the district of Vallecas, passing through Madrid district centre and finishes outside of the Rayo Vallecano football stadium.

This race has always been held on December 31st since 1964 when Antonio Sabugueiro decided, together with a group of friends, to create the “Gran Premio de Vallecas” (Vallecas Grand Prix), that was the name of that first edition in which only 57 runners took part and they were professional runners; easy and fast timing, right?

A little history of the event

During the first 17 editions, participation was exclusively male and only “patronesses” of the race were allowed to take part, but from 1981 onwards, the women’s category was added. Grete Wait, a Swedish athlete, was the winner in the first women’s category. Isaac Viciosa has been the athlete who has won this race the most times, 4 times, 3 of which were consecutive (1996-2000-2001-2002).

It has been 14 years since a Spaniard has won this race, having been Chema Martínez in 2003 and Marta Domínguez in 2008.
In 2006, Eliud Kipchoge could have beaten the world record in this distance with a time of 26:54 if the race course had been homologated, but this was not possible due to the difference in altitude between the start and finish line, but it was Jacob Kiplimo who beat the record in 2016 with a time of 26:39.

Currently, two editions are held: the international edition for runners with a time of less than 39′ (men) and 45′ (women) and the popular edition, in which any runner over the age of 16 can participate.

The record participation of the race is 39,000 participants in 2011, surpassing the famous San Silvestre de São Paulo.
There has only been one occasion so far when the race has not been held: in 1969 due to the economic crisis. In 2020 and despite the COVID-19 crisis, the international edition could be held with a reduced capacity and in a closed circuit in Vallecas, the popular modality could not be held in person and was held virtually with the timingsense Virtual Races application.

This race has grown and evolved to the point where it now has two races.

For timingsense it is a challenge to time such a mythical, big and responsibility-laden race.

We’ll keep calling it “San Silvestre Vallecana” that and not “Sansi” until we’ve timed a few more, we’ll get used to it.

It took 10 professional timers to cover the entire race course because the circuit is not exactly the same for the popular race as for the international race, the start is the same, the finish line is not. The popular race finishes in the surroundings of the Rayo Vallecano stadium, while the professionals finish inside the stadium: this already means setting up two finish lines.

We had the invaluable help of our clients for the challenge: Forevent and Eventsthinker who provided us with both human and technical support.
We had to set up 6 timing points:

A total of 23 timing devices to ensure that there are no errors in such a demanding race as the most popular San Silvestre in our country.

In this edition it was possible to participate in virtual mode, and the participants of this edition had their own Live rankings to follow the race live with video replays. 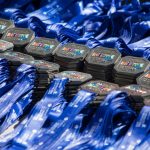