Hi! In this article we’re going to answer the question:

Why do UHF GEN2 timing systems work so well on the starting lines?

In this other post we talked about the far field and the near field; why chip timing had travelled from the shoe to the shirt back and, at one point in the same post, I mentioned that systems on the UHF band work really well on the starting lines. I will now explain why, and to do this let’s start by looking at what a GEN 2 UHF system actually is. GEN 2 is the short name for the standard, and stands for second generation.

Timing systems like the ChampionChip or HDD by Rfid Timing Systems transmit at low frequency. Timing software like the old Dag System software transmits at high frequency, while the Ipico system is dual.

The mat readers transmit at low frequency, the chip is loaded and responds at high frequency, completing what is known as a full-duplex path; the timing system and the chip can talk at the same time.

Timing Sense, Chronotrack and Mylaps transmit on the UHF band.

This means that the questions from the reader and the responses from the chips are much faster on UHF. The reader transmits on one channel and the chip responds on another.

You might think that because of this it would be a full-duplex communication since they talk on different channels, rather like what happens with a mobile phone and its users, but in fact the chip returns part of the signal it receives. While the chip is returning the signal, the reader only listens. In the following article I will address this topic.

Why did ChampionChip have problems with timing of cycling en route?

As explained above, ChampionChip uses a low-frequency timing system based on TIRIS by Texas Instruments. 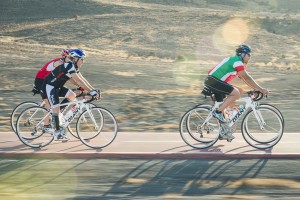 When a chip passes through one of the mats, the antennas inside it load the chip. The chip has a resonant circuit that is loaded in periods of 15 to 50 milliseconds, depending on the application. I could never measure how long ChampionChip loads for with an oscilloscope, but I’m inclined to think it would be 50ms. In that time or less, the chip loads at 134.2 Khz at which it resonates until the transmitter suddenly stops transmitting. At that moment, the chip stops receiving power and, due to inertia, downloads what it has stored to its internal capacitor though its coil using FSK. The chip takes less than 20 milliseconds to download, depending on the number of the binary code. It only downloads 128 bits where it puts in its unique code. This is the whole protocol.

This calculation is not 100% because it depends on the configuration that ChampionChip designed at the time for its timing systems, but if their mats are 1 metre long and they chose load periods of 50ms, if the chip takes 20ms to download, it means that the maximum speed that they can read a participant on a mat is around 50km per hour, based on this formula:

And this is only if there is a single chip on each mat. With the timing system using HDD chips and with Ipico it’s even worse. Moreover, the HDD system has the peculiarity that the transmitter is not as good quality as ChampionChip and it’s often difficult or impossible to get the optimal current in order to obtain the best reading height. And even at the maximum, it doesn’t read that high. Ipico, with a good surface and a good mat configuration can read at a height of one and a half metres. But this doesn’t always happen.

If there is more than one chip on the same mat, the two chips try to talk at the same time and they generate noise for each other. There are a series of systems for filtering the most powerful signal (inevitably the chip closest to the mats) and some anti-collision systems. Even so, the transmission is so slow that they are not really effective. So, knowing all this, why does ChampionChip work so well, with 95% of readings at the starting line with a single line? The main reason is because they divided the mats into much smaller segments where receiver antennas were placed and where no more than one person would fit. With these solutions they managed to make a system that could get a very respectable starting line reading.

These sports timing systems are no good for cycling in my opinion. They might work for MTB with a good ground surface, but the mats are not designed for a racing bike or for their speed in a sprint finish. In 2013 we timed the Quebrantahuesos bike race and the finish was on a downward slope. With our UHF system we had no real problems, but I think that with ChampionChip it would have been a disaster. The racers came in really fast and in big clusters. However, ChampionChip has been the only system on low frequency that has obtained really good numbers for starting line times. For example, the HDD system has a much worse filtering; you need around 8cm of height difference for it to be able to distinguish between two chips on the same mat and I don’t think it has any anti-collision algorithm implemented.

What advantages does a GEN 2 UHF timing system have?

In a GEN2 UHF timing system the information transfer rate can be much faster, for the simple fact that it operates at a frequency that is approximately 6575 times higher, allowing it to transfer information much more quickly. This has also allowed the creation of a much more complete protocol. The timing chip isn’t just loaded and then downloaded with its code; in fact, it is never downloaded until it leaves the field. It also does a lot of other very interesting things.

To give you an example, take a look at this video, which I think you’ll like:

Of course, it’s important to take into account that these are ideal race conditions, but it gives us an idea of how fast and high a chip can read on the handlebar stem or front plate of a bike.

We already know that the chip reads very fast, but wouldn’t there be collisions when the reader asks what chips are active out there? Yes, but if collisions occur when two or more chips respond at the same time, this is detected and an anti-collision algorithm called the slotted aloha protocol is used. I’ll explain this very briefly because it’s quite complex. It means that the times are divided into slots and the chips can only respond at the beginning of a slot. Based on the time it has been on for, it generates a random number between 1 and whatever we indicated for programming and it will wait for that slot number to respond. Whichever chip has a lower number will respond first. In this way, new collisions are avoided and all the chips respond one by one. It is important to choose a good number of possible slots, because if there are more free slots than the chips that are out there, there will be a lot of empty spaces where nothing will be transmitted. If the reverse is true, there will be too many collisions. Remember that the chip chooses a number randomly from various options. The fewer possibilities it has to choose and the more chips there are, the more collisions will occur. But you don’t need to worry too much about this because the new readers, like the Impinj reader, adjust this value on their own.

The first ALOHA protocol was implemented at the University of Hawaii and it’s a curious story that I’ll share with you in another post. 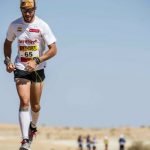 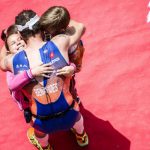