The timingsense active tag: the most durable

This post will explain why timingsense has developed the most durable active transponder you will find in any active timing system in the industry.

Waking up the chips

An active tag can be woken up in several ways and the way it is woken up or activated will directly affect the sensitivity:

Why is it necessary to safely wake up an active chip using patterns?

Nowadays, there are infinite  “noises” in the world: noises are simultaneous electromagnetic emissions with a huge variety of frequencies. Often, especially at low frequencies such as those used by active systems, emissions are produced by devices that do not intend to emit anything but generate noise coming from mechanical parts such as motors, transformers or other coils in general.

In addition to all these primary signals called fundamentals, an infinite number of harmonics are also generated. These are nothing more than “replicas” of the fundamental signal at multiple other frequencies of that signal. That is more noise at many more frequencies.

If we were to use the basic, erratic or random way to wake up the chip, the transponder will receive noise at the frequency at which it works, waking up and consuming the battery. This noise can have a surprising frequency: in tests performed in Timingsense labs, the active chip can wake up even several times per minute, consuming its battery more quickly.

Therefore at timingsense, we have developed a method of waking up the chip to increase battery life and durability. We have designed and tested the active chip with such a complex pattern configuration that the chances of it waking up randomly due to noise are virtually zero. Furthermore, the battery consumption would be minuscule in the unlikely event that it would wake up for a few seconds.

How long do you want active chip technology to last?

When investing in this type of technology, it is important to make sure that the active chip does not wake up erratically and randomly. For this reason, you should buy a device to detect noise where the active chips are stored, including the warehouse and any place before a race to prevent the chips from constantly waking up and wasting battery power.

In short, you should think about whether the investment you are going to make in active transponders is for 3, 5 or 10 years. We have it clear, an active transponder can not die by unnecessary use of the battery and we have opted for a safe and pattern-based awakening so that the battery life of the active chip lasts for many years.

Ask us any questions and we will answer you quickly. 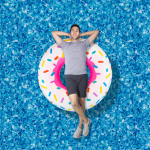 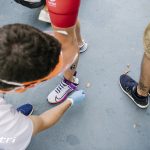 How to measure the accuracy in an active transponder?Aprende, Timing Sense